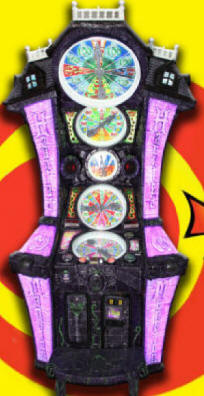 The Haunted Adventure collection is the first of its kind in the redemption industry. It has a look and feel unlike any other game offered by us or our competitors. The game itself was hand sculpted by a team of designers and molded in fiberglass. It features dozens of bolt on casted piece which were all hand sculpted as well - including bats with LED eyes, a ticketdoor goblin, and other small details. No other game looks like one of the Haunted Adventure collection or has as much detail or artistic merti. People already have bought units simple because its a nice looking game which acts almost as an attraction in and of itself.

It is a spinner base skill game consisting of five different levels. The player begins in the Dungeon and by landing in the either the "GO-UP ZONES" or SECRET PASSAGES the player can move about the house, the manor, or the hotel. There are also booby traps in the higher levels which will take a player back to a previous level.

Functionally - it is a plug-n-play set-up in the back. All the spinner brackets are identical and use a system of dip switch settings to assign them a certain level. Servicing the machine is easy and unlike anything offered by us or our competition. It also offers programing options which are detailed in the manual. There is a small controller on the inside of the game which a customer (someone who owns the game - not the player) can pull out and do several different things with. They can run either simple diagnostic modes through the controller - to help pin point a game which is experiencing problems - they can access statiscially information about ticket payouts, how many games have been played - how many times specific spinners have spun and what the average number of points a spinner is giving - amongst other things, or manually set the values.