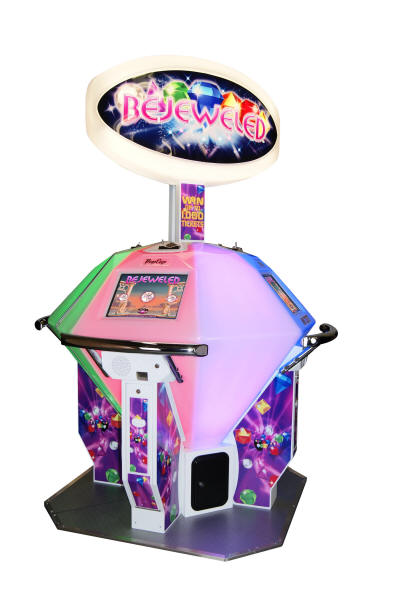 THE WORLD WIDE PHENOMENON IS HERE!

The smash hit PC, mobile and console puzzle game is coming to the arcade in this beautifully crafted ticket redemption master piece! Over 50 millions copies have been sold worldwide and 500 million have played it which makes this ingenious puzzle game a sure fire success.

For anyone new to the Bejeweled phenomenon it couldn’t be any easier to pick up and play. Just swap adjacent gems with one another to create lines of 3 of the same kind. Bonuses are awarded for creating lines of 4 and 5 gems. Score as big as you can to win as many tickets as possible in the time limit. For sites without ticket redemption, Bejeweled can also be set up to payout prize vouchers.

Place two Bejeweled back to back to create a 4 player centre piece that will stand out anywhere as it creates a fully lit gem which will shine in any location!