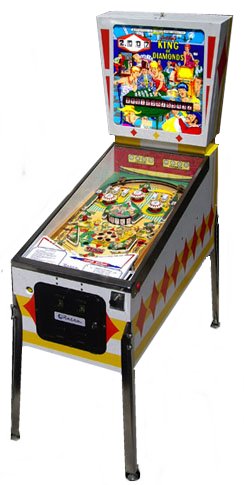 The idea of the new retro pinball machine actually arose during a discussion among friends at an Arcade Game Auction in 2002, when Herb Silvers determined the King of Diamonds pinball by Gottlieb was the best-selling game in his store. With an idea of making the pinball game electronic, Herb and Reinhard met a few months later to discuss and draw up plans for the new game. Using parts from the manufacturer Stern Pinball Inc., Herb and Reinhard created a prototype they revised during the next few years. An improved version was finally introduced at The Pinball Fantasy Las Vegas show, sponsored by Herb, and was presented to the public and game industry at the Chicago Pinball Expo in 2007—where it was an absolute hit! Gene Goodman and Michael Patz joined the team, shortly thereafter forming the Retro Pinball company. The company signed an agreement with Gottlieb in July of 2007 and will be producing their new pinball game to distributors and home owners starting this year, 2008. Each game will feature Retro Pinball's custom board system and remanufactured Gottlieb parts, which are easy to replace and repair. Future games are to come.

Now is your chance to really play pinball. This 1967 classic Gottlieb original is available new for the first time in over forty years. A true players pinball, with classic retro style appeal. This pinball will look great in any game room.
You don't need to worry about service problems with this pinball. It is one of the easiest pinball machines ever to keep serviced. One main board runs most of the pinball machine. Any hard to reach lights will be long life LED's.