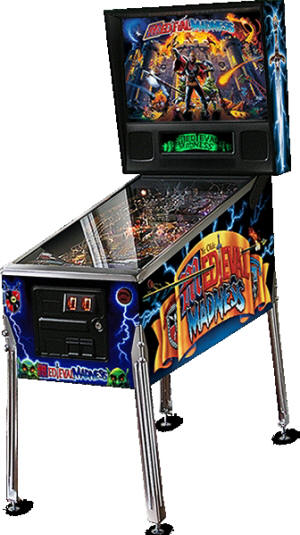 Behold the Renaissance of Pinball, its Ye Olde Medieval Madness!

Chicago Gaming and Planetary Pinball are pleased to offer the rebirth, under license from Williams Electronics Games, Inc., of the original smash hit pinball machine, Medieval Madness. Recreated to the exacting standards of the original game this remake contains a number of enhanced features not available on the original game, including: modern electronics, fully adjustable color display, all LED lighting, and class D digital audio amplifier.

Medieval Madness is widely held to be one of the best pinball machines of all time. This status coupled with the fact only 4,000 of these games were built has driven the resale value of the original game beyond the reach of most pinball collectors.

Whether you are a pinball novice or expert, you'll come to appreciate the gameï¿½s universally appealing gameplay, which includes the exploding castle, motorized drawbridge and two pop-up trolls. Your mission in this multi-ball game is to battle for the kingdom! Step back in time to the middle ages of the 15th century where kingdoms were fought and lost for.