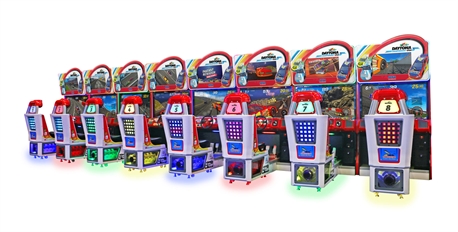 THE TRUE LEGEND IS BACK

DAYTONA® USA is the holy grail of arcade racing - First launched in 1994, this brand new entry brings Sega’s #1 racer screeching into the 21st century! DAYTONA® Championship USA features three brand new tracks including a recreation of the newly renovated DAYTONA International Speedway®! In addition, the original three classic courses have been remastered for the modern era.

Sega has gone all out to stand out from the pack! Lit from top to bottom DAYTONA® even has a moulded under seat engine! New game features include a live camera feed so you can enjoy maximum bragging rights as you overtake your friends! Also, brand new to DAYTONA® is the ‘Live TV’ inspired video billboard. This brand new feature allows spectators to see what’s happening in the race, whether it’s a crash, a pass for position or to find out who’s winning or losing! Have you got what it takes to take the flag again.... because DAYTONA® is back!