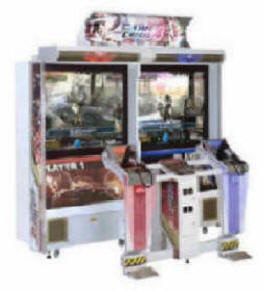 The Time Crisis series continues to evolve, with the introduction of the VR view system. Players are no longer on the set path (rail system). Players can now forge their own path, opening new tactics and pathways.

While in the heat of battle players will notice arrows appearing on the screen to the left or right. If the player chooses, they can point the gun in one of those directions to view or move in that direction. This allows players to get the drop on approaching enemies or move to a better tactical position for shooting.

This version also supports the weapon change system introduced in part 3. Where if player is hiding for cover they can change guns (ammo permitting) to something with more firepower (e.g. shotgun) or fast firing speed (e.g. machine gun). There are even sniper rifle and mounted machine gun scenes in the game.