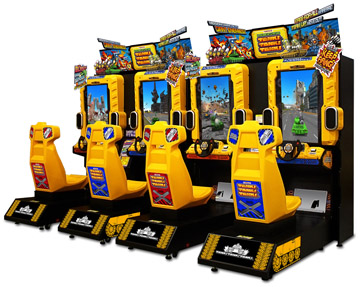 SKU:
$17,640.00
$17,640.00
Unavailable
per item
Namco's newest title is a game that is absolutely fun for the whole family. Tank! Tank! Tank! is a motion cabinet party game unlike anything that has been played before. The combination of a tank driving game and a shooter is the best new concept to come along in years. The game play possibilities are endless as players can choose from 3 different game modes: Free-For-All, Team Up, and Cooperative Play.

Free-For-All mode is a "Battle Royale" where all players compete against one another. Up to four players can link up and face off in several different battle fields. In Team Up mode, players can choose to be on either the Blue Team or the Red Team and fight it out to see which team is truly the best. In Cooperative Play mode, players join forces to exterminate giant Arachnos, take on the Red Dragon, and bring down other giant monsters. Every game that is played becomes unique and unparalleled due to the destructible environment in all game modes.

The exceptional experience of Tank! Tank! Tank! begins when a player's photo is taken with the "NamCam" and used as an avatar to identify the player's tank. Players can choose from many different accessories such as military helmets, wrestling masks, space helmets, etc. to further customize their avatars. Once the game begins, every shot that is fired can be felt through the force feedback system in both the steering wheel and the seat! Many different weapons are available in addition to the traditional tank cannon such as the Machine Gun, Plasma Bolt, Missile Rack, Colossus Missile, Mega-Beam, and Squirt Gun. Each weapon has its own unique force feedback! The simple controls of a steering wheel with fire buttons along with forward and reverse pedals make this game easy to play and fun for all.

With varying game modes from cooperation to competition, every game play will be unmatched and Tank! Tank! Tank! will undoubtedly be #1 party game and the most fun players will have playing a multi-player game.