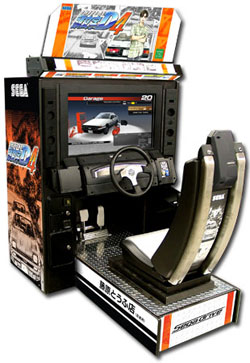 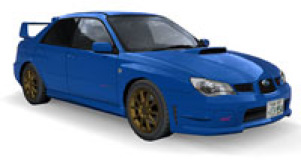 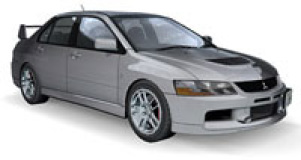 With the beautiful graphics created by SEGA's newest board, LINDBERGH, realism and production value have been greatly enhanced!

Play Legend of the Streets, Time Attack and In-store Battle with intensity that you've never felt before!

Experience the new age of racing on Initial D4! Aim to be the best of the best just like member of Project D!

Initial D License Debut!
(Rewritable player card data)
Magnetic card used in the previous title is replaced to rewritable Player Data Card "Initial D license".My Character" face can be printed on an IC card to create a personalized license. The illustration of "My Character" is in the same touch with the original manga --- makes you feel like being one of the Initial D characters. Up to 3 cars registerable on one license.

How to get the parts for "My Character"
You can upgrade your avatar by playing the game using your Initial D license. Every 6 plays, a slot machine will appear before the game is over. Spin those wheels to decide which part(s) you will get. Renewed "My Character" image is printed on the License everytime you make a change on it. Infinite parts combinations are available. Create the character of one of your very own! Track Your Ranking Online
When you play Time Attack mode using your Initial D license, an "entry code" will be displayed after finishing the race. Input the entry code on the Internet Ranking to compete against the players all over the world! Brush up on your skills and become the fastest in the world!

Familiar Modes had Further Evolution
Go up into the mountains in the classic "Legend of the Streets" mode and race one-on-one with rivals from the original manga. Rivals are drawn in watercolor with real-time 3D shading for you to enjoy the more-than-ever realistic world of Initial D. Of course, other two modes "In-store Battle" and "Time Attack" are also geared up to your challenge!