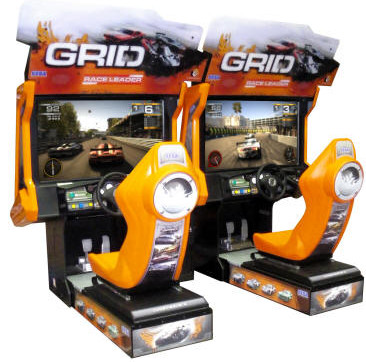 GRID 42” is the latest addition to SEGA’s family of GRID Driving Games which includes GRID 32” Standard and GRID 55” Deluxe. How do you improve the best driving game in the market? You make it bigger without increasing the price.

“GRID is hands down the best coin-op racing simulator available today,” said Sega Sales Manager, Tom Keil. “GRID delivers a level of realism that gives players an extremely good idea of what it would be like to race some of world’s most amazing super cars. There are subtle differences from one car to the other that include engine sound, braking and acceleration capabilities, and top-end speed. The end result is a driving experience you’d have to layout half a million dollars to realize outside of an entertainment center.”

The new GRID 42” bridges the gap between GRID 55” Deluxe and GRID 32” Standard. “Monitor size makes a big difference in both presentation and game play,” continued Keil. “Players have become so accustomed to large-format displays that it’s expected in most commercial applications. GRID 42” Deluxe creates an immersive racing simulation with more tools than just a bigger monitor.

8 challenging road racing circuits from around the world including: