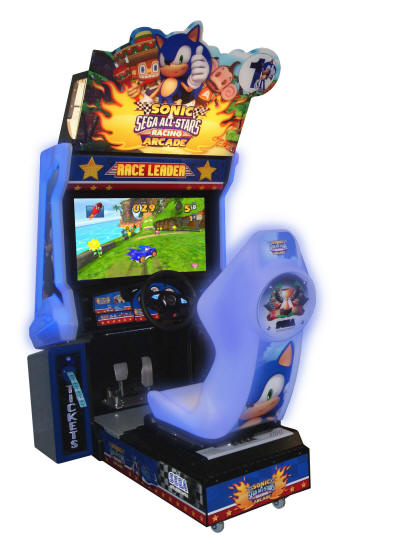 AN ALL STAR RACER

In a frantic battle to the checkered flag, Sonic and friends speed around tracks set in medieval castles, lush rain forests and bustling cities, all taken from the visually rich and varied universes of Sonic and Sega. Fan favorites such as Dr. Eggman, Tails, AiAi, Amigo and many more will join Sonic in their custom built vehicles.

Battle it out in Championship mode or link up to 8 cabinets to find out who the ultimate racer is! SSR features a revolutionary new illuminated cabinet and seat that will grab players attentions instantly. They will keep coming back for more too, because Sonic & SEGA All-Stars Racing Arcade features a ticket payout system, so not only do players have the satisfaction of victory over their rivals, they will now be rewarded for it too!

Sonic & SEGA All-Stars Racing Arcade is a port of the same game which was released for Xbox 360, Playstation 3, Wii, Nintendo DS and PC in 2010. The game is Sega’s answer to titles like Mario Kart, featuring power-ups for characters to obtain on the track and a roster that features characters from various Sega franchises. Beyond that simple comparison however, SSASR also includes features such as drifting. “The drift pedal allows players to slide through corners and perform tricks in the air, charging a turbo boost. Meanwhile, the full range of items is available to each player, and includes the usual projectiles as well as shields, speed boosts and even a horn which knocks out nearby racers.” Tracks reflect environments seen in Sega games over the years. This game marks the first time Sonic will appear as a star of his own arcade game since Sonic The Fighters was released in 1996.

To maintain player accessibility a couple of tracks from the console version were removed( particularly the Super Monkey Ball levels) but the game includes a ticket redemption option that could be added to the game. The game also uses a separate pedal for drifting and has buttons on the steering wheel (similar to R-Tuned) for power-up usage. It also has three game modes to pick from:

Quick Race – Race and battle against others, single or multiplayer

The cabinet design is similar to what Sega has used recently with arcade titles such as Sega Racing Classic and GRID but with a notable upgrade: the sides and seats are translucent and constantly change color, as a part of the attract mode. The screen included with these cabinets has typically been a 32″ HD LCD. The arcade standard wheel/pedal controls should mean that the game will have superior control over the home versions. The game can also link up to eight units locally.
Features: