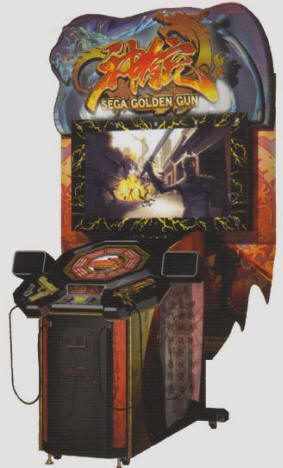 The guns are fully automatic and never need reloading - once you run out of bullets the gun reloads automatically without having to aim off screen. This makes the game suitable for beginners and pros alike. The game does not include any blood or gore - instead enemies explode into dust - making Sega Golden Gun suitable for all ages.

Players use their gold coloured pistol - the "Golden Gun" - to take on hordes of zombies, phantoms and other creatures. There are three different stages to battle your way through, each with their own boss. Players can select their own route during play, resulting in many ways to get to the end of the game.

Sega Golden Gun runs on the same engine which powered House of the Dead 4, with impressive graphics displayed on the 42" High Definition LCD screen.